If Only They Had Left the Goldfish

Their ability to abscond was severely hampered by the insistence of bringing along the goldfish.
"I told you we shouldn't bring the damned goldfish!" Jack growled at her through gritted teeth.
"Goldie is part of the family! How could I leave her behind? Who would feed her?" Laura sniffled, looking tearful.
"Would you just be quiet? They'll hear us!" Jack snarled in an angry whisper.
He silently cursed in frustration. He loved Laura, but did she have to talk all the time? It was bad enough that she had forced him to lug this stupid fish bowl around. It was cumbersome, and water sloshed out of it with every step he took, soaking his shirt.
"Oh my god, Jack! Jack!" she exclaimed loudly. "Jack, we have to go back! I forgot the fish food!" she screeched, digging frantically in her purse.
"Shhh!" Jack urged her. But it was too late. Her voice had carried, and every hungry, shambling corpse in a two block radius tilted its head with interest at the noise, and then, in unison, they all began to limp toward Jack and Laura.
He had thought that damned goldfish was probably going to get them both killed, but now he realized Laura's talking would do the job first. He set the fish bowl down and prepared to die. 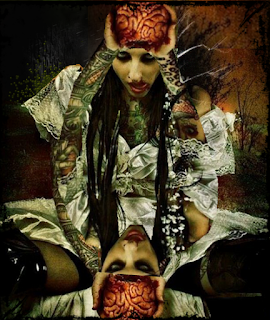 Story created from the prompt: "Their ability to abscond was severely hampered by the insistence of bringing along the goldfish."
This prompt was furnished by the site Adam Maxwell's Fiction Lounge. For this site or other helpful writing prompt sites, check out:
http://www.bubblews.com/news/1103708-how-to-chase-away-bubblews-burnout
Image: "Self-Consumption," created with Polyvore.
If Only They Had Left the Goldfish, Alisha Adkins, copyright 2013.  First published on bubblews.com.  It also appears (adapted) in the Abecedary of the Absurd as part of the collection Twisted Tales for Twisted Minds, second edition.
Posted by Unknown at 10:06 PM