Here's the latest progress on the cover art for Zombie Gras. 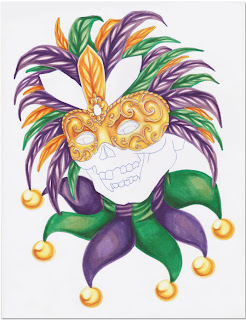 Posted by Unknown at 8:52 PM No comments:


The local news team assigned to parade coverage were reporting live from the parade route.  Perched in a bleacher barricade constructed along the street, the two news anchors, one male and one female, and the weekend weather man were all slightly pink with inebriation, which was par for the course.  What wasn't so typical, however, were the expressions of wide-eyed terror that they wore or the shaking evident in their voices as they reported on the scene around them.
The parade floats had stopped rolling, stalled in the street, parting the sea of carnage that stretched out as far as the eye could see.  The newly risen dead, decked in all the splendor of their colorful Mardi Gras costumes, chased parade spectators to and fro, catching and devouring them here and there.  Near the television crew, a blood soaked woman with half a face stumbled by, lighted Mardi Gras beads flashing, twinkling festively against her exposed and torn bosom.
The throng of dead were thick against the news team's bleacher box, pressing in around them as they nervously reported on the events around them.
"And, over there, Barbara, I think I'm seeing a clown eating another clown." said the male anchor.
"No, Tom, I think that clown is eating a pirate."
"Ah, you're right.  So it is."
"Oh, the humanity..." sobbed the weather man.
"And, over to our left, you can just make out the remnants of a high school marching band eating their way through the crowd in front of them." Tom continued. 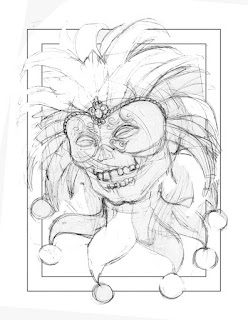 First Zombie Gras cover art concept sketch above!
Posted by Unknown at 2:21 AM No comments:

A Random Chapter from Subliminal Debris (my current writing project)

Susan let Nick come in with her and fixed him a light make-shift meal, silently cursing the fact that she had been forced to abandon the groceries she had purchased.
Over mediocre pasta, Susan asked Nick to elaborate on what was supposedly happening.
Nick took a deep breath.
"OK, here it goes: in addition to our individual everyday consciousnesses, there exists a collective, universal unconsciousness which is identical in all individuals. This collective unconscious is inherited, and it contains ancient, archaic images -- the primitive source of universal symbols found in myths, legends, poetry, and dreams -- what are known as "archetypes."
"Sure -- or "primordial images" or "archaic remnants."   Susan added, nodding.
"Huh?"
"I'm a licensed social worker.  I had to take a lot of psychology courses.  I'm familiar with this stuff, at least theoretically.  But what does it have to do with squat legged malevolent shadows?"
"Beautiful and smart." he thought.
"That's good news." Nick said.  "Maybe you can help me wade through and make sense of this bizarre mission I seem to have involuntarily acquired.  The central problem seems to be that the collective unconsciousness is dying."

"Oh, that's bad." Susan gasped, grasping the significance immediately. "If Jung was right, archetypes are responsible for the human quality of human beings. The preconscious psychic disposition enables man to react in a human manner."
"That's what the bird said."

After a few hours of mutual hypothesizing, interspersed with a healthy quantity of small talk, Susan asked Nick if he would be willing to go back to the shopping center parking lot so that she could try to retrieve her car.  He acquiesced.
The proceeded with caution, but although tell-tale cracks remained, there was no sign of the shadow creatures.  There was no sign of her groceries, of course; if cackling shadow creatures hadn't delightedly torn into them, no doubt some fellow shopper had absconded with them.  More importantly, though, her car was still where she had parked it.  Nick pulled up beside it and Susan hastily jumped in and started it up, eager to flee while she could.
Nick hated to part ways with Susan.  Having a sudden, unexpected ally in this ever-more harsh and crazy world had given him a great sense of relief.  Not to mention, he thought she was incredibly cute.
Hurriedly, he scrawled his cell phone number on a scrap of paper that was sitting in his cup holder.
"In case you run into anything else otherworldly, or need help with anything, keep my number." Nick said, handing it to her.  He was pretty sure that sounded valiant and selfless, not lecherous and desperate.  He hoped that it did, anyway -- but not as much as he hoped that she would call.
"Thanks!  For everything!  I'll call you later just to make sure everything is OK.  No more talking ravens or whatnot."
Nick smiled, deeply pleased with this promise of future contact.
"I just have to get to my date first." Susan said, and then she drove away.
Suddenly Nick didn't feel so pleased.
Posted by Unknown at 9:25 PM No comments: