Another Random Chapter from Subliminal Debris


At first glance, the park lay still.  However, as Nick approached, he began to notice minuscule stirrings.  Still running, as he grew closer, he could see that there was a ripple of movement running across grass in the park.  It looked like hundreds of hyperactive clumps of dried grass clippings, or maybe dancing dandelion flowers, were bobbing along the ground as they were blown by the wind.
Nick frowned.  There really wasn't much wind today, come to think of it.
The park was full of Archaic Remnants -- creatures about the size and shape of dust bunnies that typically go unnoticed by human beings.  Archaic Remnants gathered in the wake of subconscious activity, drawn to its departing echoes.  Usually, a few dozen might huddle in the corner of a bedroom after an especially fitful night of dream-laden sleep.  However, the rift was causing their population to explode.
Archaic Remnants were oddly cute, sweet natured little creatures that generally did little more than make indecipherable but endearing squeaking noises and flit around in corners.  Since they characteristically remained in peripheral vision, Nick had never noticed them before.  However, as he watched the ground swim with these wee balls of animated fluff, they seemed very familiar.
"We are Archaic Remnants.  Let us help you!" they cried excitedly in a disorganized cooing chorus.
Archaic Remnants are renowned for their desire to be helpful, although their good will usually manifests itself in small, unnoticed acts such as the retrieval of lost pens and paperclips.  Nick did not know this, of course, but he was used to having weird things talking to him by now.  If these creatures that looked like dancing dust motes wanted  to help him find and rescue Susan, he would gladly accept their assistance without questions.
"Toss us in the air around the park." some of the remnants instructed happily.  "Scatter us like seeds in the wind.  We stick to subconscious matter in the same way metal shavings are drawn to a magnet."
"Put out your hand!" another directed cheerfully.
Nick knelt down on one knee and put out his hand.  In droves, Archaic Remnants began to leap up onto his palm.
"Will it hurt you if I throw you?" Nick asked.
"Oh, yes!" a high spirited chorus answered without hesitation.  "It will kill us."
"When we strike the ground, we will die, and our bodies will deflate into a residue like fine pollen." one of the remnants in his hand explained without a hint of trepidation in its squeaky little voice.  "That residue will work like dusting for fingerprints.  Our dust will adhere to subconscious material, so you will easily be able to follow the shape-shifter's trail."
Hundreds more Archaic Remnants gathered around Nick's feet, excitedly leaping over his shoes as they waited their turn to be tossed to their deaths.
Hesitantly, mumbling apologies, Nick tossed a handful of the remnants around him.  At first, he saw nothing, but then he spied a partial  paw print.
Spurred on, he canvassed the whole park with remnant dust, unable to dispel the feeling that he was committing genocide as he murdered the joyfully burbling remnants one handful at a time while their brothers shouted encouragement.
When a remnant deflated into powder over an area where the shape-shifter had been, its dust adhered to the print, turning shiny black with an iridescent oil-like sheen.  Nick was able to follow these tracks through the park and, still tossing his merry suicidal new friends as he went, he tracked it for another two blocks, where its tracks veered into a dark alleyway.
Nick rounded the corner with the remnants tumbling along at his feet as he strode.  The alley, which fell between a local grocery and a residence, dead ended amid trash cans, old boards, and debris.  However, defying all laws of science, at the very end of the alleyway, a tunnel hung in the air beside one of the trash cans.
It had no substance in the physical world.  It was just a hole, sitting about chest-high and wide enough for a man to enter.  If you walked around to look at it from the other side, it was like the back of a mirror -- just an opaque black void with a brick wall sitting inches behind it.  But from the front, one could see that, in whatever dimension in which it existed, it stretched on for a great distance -- perhaps a mile or more.
"It still may not be too late to get Susan back!" the remnants cried up at Nick, bouncing excitedly around his feet.
Peering into its black depths, Nick could see that the tunnel was lined with crumbling earth, ragged twigs, and inky black vines.  The shadow shape-shifter's tracks entered the tunnel, and it had clearly been carrying Susan with it because a snagged scrap of Susan's clothing hung from a thin, gnarled branch near the entrance.
The Archaic Remnants chortled, "This is a tunnel between planes of existence.  It runs between the two realms of human consciousness.  Your physical body must not cross into the plane of shadow.  But, as long as you catch them within this channel between the physical world and the collective subconscious, you can still stop him!" 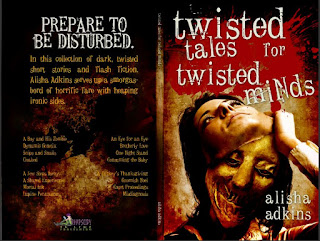 It should be available at Amazon soon.  However, it is already available directly here:
Twisted Tales for Twisted Minds  - a short story collection

Hmmm, my 100th post.  How the hell did that happen?  In person, I am someone who steadfastly tries to avoid talking about herself.  Ah, well -- so it goes.

My current writing project, which is still in title limbo (call it Subliminal Debris for now), continues to take shape.  Currently, its about 38,000 words and is probably two-thirds finished.    Here is an excerpt from what I wrote during the past week:


Returning from a stroll to the corner store, Susan paused to watch a black dog that was frolicking in a small neighborhood park.  Standing outside of the park, she couldn't help but smile smiled as she observed the exuberant animal bounding back and forth between the slide and jungle gym.  She wondered where its owner was.  It didn't seem to even be wearing a collar.
Squinting to try to see it better, Susan decided that the dog must be very shaggy because she just couldn't make out any of its features.
But the longer she looked, the more she had the feeling that there was something not quite right about the dog though.  Susan leaned against the fence and watched for several minutes, but she couldn't put her finger on it.
Then it hit her.  The dog had no shadow.  As it trotted happily to and fro, there was no shadow tagging along beneath it.
Susan frowned, knitting her brow in consternation.  She knew that the prudent thing to do would be to get the hell away from here right now, but she hesitated.  This felt like a puzzle that she needed to solve.
And then a second, even more disturbing, realization hit her.
It wasn't just that this dog had no shadow.  This dog was shadow.  It wasn't a black dog.  It was a shadow dog.
This was wrong.  This was very, very wrong.
Posted by Unknown at 5:06 PM No comments:

Constructed by alishaadkins on Polyvore

Posted by Unknown at 7:45 PM No comments: